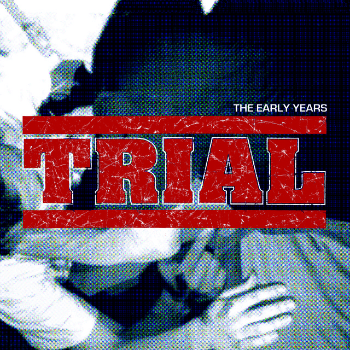 TRIAL “The early years” 2xLP (2nd press on Refuse Records, black vinyl)
Widely known for their full-length record “Are These Our Lives?” TRIAL was a band who, at the time they were coming up from 1995-1998, were largely ignored and underappreciated. These were not the years of big shows and epic photographs. These were the years of five to thirty people at each show, and long drives motivated by a love of hardcore. During the mid 1990’s, there were hundreds of bands with a message and it was easy to get lost in the sea of them all, but TRIAL was one of the few who stayed true to what they had to say. On these recordings, their earliest material leading up to the recording of their LP, TRIAL formed the foundation of what was to come. These early songs are raw and forceful, each making a statement about an issue, cause, or emotion which the band felt was important to share on behalf of all listeners. As was true throughout their time together, TRIAL always had other people in mind, and these songs, infused with both a love of hardcore and a passion for social involvement, were their statement on behalf of those people everywhere. This double LP contains songs that originally appeared on their demo (1995), “Through the darkest days” 7″ (1996), and “Foundation” 7″ (1997), “I’m still screaming – live” 7″ (1999), as well as two cover songs – one of them for a first time on vinyl. In addition, for the first time ever in print, the release contains a 28 page booklet featuring singer Greg Bennick’s tour journals from that time which document the experience of touring in the 90’s along with insight into the internal workings of the band.