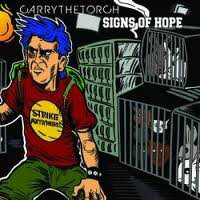 Goodwill Records 2010
This is the third 7” in the Goodwill Records split 7″ series showcasing international artists who draw the covers for the records in their series. And the cover for this split is drawn by the almighty Brian Walsby! For those not in the know, let’s just say that Brian’s work marked the 80’s HC scene in the US, being published in tons of fanzines, used on a plethora of old HC show flyers as well as on record covers, notably the first press of 7 Seconds ‘Walk Together, Rock Together’. This 4 track 7″ is a split between Signs of Hope who are a Connecticut band and play straight-up, fast oldschool NY influenced HC. Backing them are Carry The Torch from Sacramento who play bury riff heavy HC and inlcude members of Shai Hulud and Into The Valley Of The Sun.