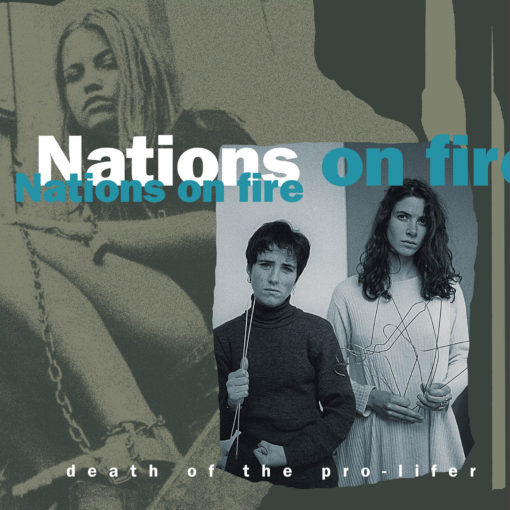 Nations On Fire – Death Of The Pro-Lifer 12″

Nations On Fire – Death Of The Pro-Lifer 12″

NATIONS ON FIRE “Death of the pro-lifer”
Re-release of their farewell album, originally released in 1995 by Genet Records on LP and Conquer The World Records on CD (as well as one of the first cassette releases on Refuse). This material was recorded over the years 1993-1995 after significant personnel changes. Edward took over vocal duties completely (also the guitar). The album contains 15 tracks, of which four are recorded live in Cologne, Germany. The theme for this album is the women’s right to choose. Part of the Straight Edge HC scene at that time was inspired by the right-wing pro-life movement and anti-choice tendencies were being espoused in the scene. With this record, the band took a stand supporting a pro-choice attitude. And although discussions about the issue of abortion have expired within the scene, the subject matter is still present in mainstream politics within many countries where there are recent attempts to limit women’s rights. Other songs address the problem of nationalism (which resulted in Balkan war), racism or environmental degradation. Now the 2nd full length from this crucial political straight edge hardcore band from Belgium is available again after 24 years! It’s still inspiring with their pro-choice, anti-nationalist, anti-homophobic, anti-religion message. Remastering by Smok (Studio As One).