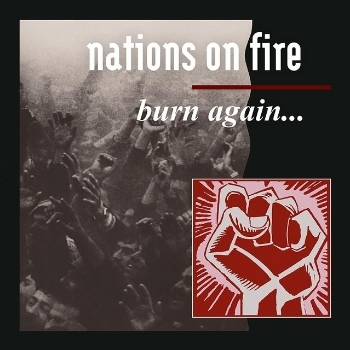 NATIONS ON FIRE “Burn again…” 12″ (2nd press on Refuse Records)
Reissue of material originally released as a double 7″ by this legendary band from Belgium – this time on a 12″! Nations On Fire is one of the most important bands in the history of the European straight edge / hardcore scene. Their releases have been hard to find for years and this 12″ reissue is the first of several releases we have a planned for Refuse Records. N.O.F. started in the early 90’s in Kortrijk by some members of RISE ABOVE and the singer of SCRAPS from France. Their fast and aggressive hardcore mixed with a good dose of catchiness and a direct, political message had so much power that it still impresses today. Their lyrics about topics, such as racism, environmental damage, vegetarianism/veganism or politics are as relevant today as it was almost 25 years ago – if not even more. Their slogan POSITIVE, POLITICAL and POWERFUL perfectly describes their music and their message. If you’re interested in European HC history, this release is a must.